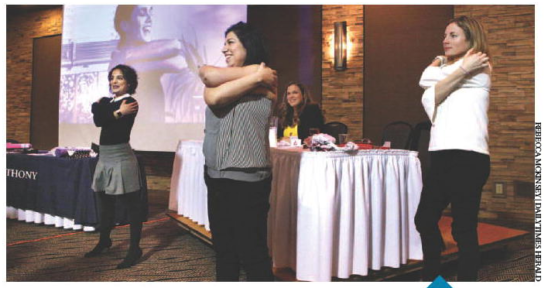 Supporting Women in the Community: Carroll Hospital Offers A ‘Girls Night Out’

This is the second year St. Anthony has hosted a “Ladies Night Out,” inviting female physicians and Carroll-area residents to meet and discuss a variety of women’s health topics. In addition to Quam, the evening featured Suzy Feigofsky, a cardiologist with the Iowa Heart Center; Tina Flores Schechinger, a family medical doctor at St. Anthony Clinic; and Michelle Heim, a family medical doctor at McFarland Clinic. “My vision is that we will grow together as a community of women,” Feigofsky said.

The evening began with a brief yoga session, as Flores Schechinger encouraged women in the audience to slip off a layer or two of clothing, as well as their shoes. “Nobody cares if your feet smell,” she said. The four doctors, all presenting for the second year in a row, answered audience questions, as well as gave brief talks on mindfulness, body image and spirituality.

To kick-off the event, Feigofsky asked the women in the audience to stand and sit down once they heard a symptom of stress that applied to them. Once she’d completed her list of symptoms — worry, anxiety, irritability, feeling flat or uninspired, being self-critical, clenching or grinding your teeth and more — only one or two out of 300 women remained standing. In response, she urged the audience to practice: “mindfulness: a mental state achieved by focusing one’s awareness on the present moment, while calmly acknowledging and accepting one’s feelings, thoughts and bodily sensations, used as a therapeutic technique.” She then urged the audience to try meditation. “It can be as simple as changing the way you think,” Feigofsky said.

Heim’s talk centered on body image: “Most of us see ourselves in a much grayer light than we really are,” she said. She showed a photo of female Olympic athletes, each one perfectly streamlined for her sport. “They’re not wondering, ‘Are my thighs too big?’” she said. “They’re thinking, ‘My thighs are huge, and I’m strong.’” Demi Lovato’s song “Confident” then rang through the room, as Heim urged women to be kinder to themselves and to others when it comes to appearances. “We need to empower one another,” she said. “Instead of looking at another woman and thinking, ‘Ugh, what is she doing in that outfit?’ say, ‘That woman is probably 56 years old and she looks sensational in that black miniskirt!’”

to Flores Schechinger spoke about spirituality, explaining that focusing on her faith, in addition to prioritizing her family and work, helped her move past years of unhappiness. She decided to go to church every week, and asked her office to hold calls during the hour she was at church that weren’t emergent. “It made a huge difference,” she said. She urged the women in the audience to focus on spirituality by finding a group of people who will support them. “Find your tribe,” Flores Schechinger said. “It may be in the yoga room. It may be in the church. But you’ve got to find those people, and you’ve got to connect. Stop caring about the masses,” she said. “You hit 40 and think, I don’t really give a damn. I’m gonna go to Wal-Mart in my pajamas. If you’re gonna judge me based on what I look like at Wal-Mart, I really don’t want to be your friend anyway.”

During the finale of the event, a Q & A from the audience, a women stood and stated that “her boyfriend says she has PMS.” Flores responded with: “Get a new boyfriend. But, also, there are simple tests that can help determine if someone needs to be treated for premenstrual syndrome or premenstrual dysphoria disorder.”

Other questions touched on pap smears, vaginal discharge, douching (don’t do it — and don’t be a douche, Feigofsky said), constipation (try adding fiber and exercising first, but then there are medications that can help, Quam said), sex positions and protecting against yeast and other infections. “Tight clothes, leggings, tights — they are not your vagina’s friend,” Heim said. “Skirts are your friends. And if you go to bed, no underwear.”