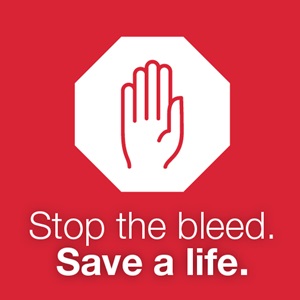 The “Stop the Bleed” campaign officially launched in 2015, but was formerly introduced in December 2012 after The Sandy Hook Elementary School shooting. Victims of the shooting, including six-year old students, bled to death before emergency medical services were able to reach them. Bleeding is a leading cause of death, but can be prevented with appropriate training.

The American College of Surgeons has partnered with Dr. Lenworth Jacobs, director of the Trauma Institute at Hartford Hospital, and other trauma organizations to create a program to increase survival rates from not only mass casualty events, but active bleeding in general. The program specifically encourages citizens to become responders through a simple education course.

CHI Health Mercy Council Bluffs’ Director of Emergency Services, Nikki Rauth, partnered with the program’s Travel Coordinator, Katie Morse, to promote emergency education to the surrounding Treynor community. The two presented the “Stop the Bleed” campaign in August. Rauth and Morse were able to obtain grants, which will help provide educational opportunities for citizens to be able to recognize life-threatening bleeding and the appropriate ways to respond. The program follows simple “ABC” methodology: A- Alert 911: Get Help, B-Bleeding: identify the source of the bleeding and C- Compress: various methods to stop the bleeding.

The Treynor “Stop the Bleed” program has provided one-hour emergency training sessions to businesses, organizations and other interested groups in Southwest Iowa. Since the program began, it has educated approximately 350 individuals as emergency responders with the goal of reaching many more.