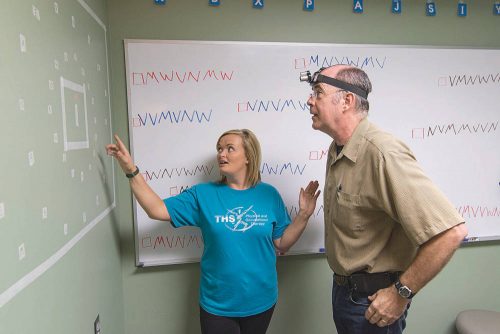 Le Mars Police Chief Stu Dekkenga works with FVH Occupational Therapist Alison Vlieger on his range of sight during a therapy session. Dekkenga was in therapy to address his left neglect caused by a brain hemorrhage. Dekkenga finished his last therapy session in early April.

(This story was originally published in the Le Mars Daily Sentinel.)

It’s been a long journey for Le Mars Police Chief Stu Dekkenga and he is adamant he wouldn’t be where he is today without the staff of Floyd Valley Healthcare.

Dekkenga’s journey began in November 2015 with a chronically plugged ear. “There were many times I would sit up in the morning and drain spinal fluid out of my ear, which isn’t supposed to happen,” Dekkenga said.

After a CT scan, a tear was identified in a membrane in Dekkenga’s brain that was causing the spinal fluid to drain from the ear, which required immediate surgery. Dekkenga went to Iowa City for the initial surgery, which included removing a piece of skull to patch the membrane.

After surgery, Dekkenga developed meningitis, which quickly became life-threatening and caused a brain hemorrhage. The chief pulled through, but the brain hemorrhage caused him to develop left neglect, a neurological condition which limited his vision to the left.

“Wherever I looked, the left went away,” Dekkenga explained. “It wasn’t like it was blurry, it just went away. That particular piece of brain that was damaged, its function was to interpret and relay left. My eyes were healthy, my brain just didn’t interpret what I was seeing.”

Returning to Le Mars following a month of inpatient care, Dekkenga began speech, physical and occupational therapy at Floyd Valley to help combat the left neglect. Dekkenga, who spent a year and a half working with Floyd Valley’s therapists, said he was awe-struck at the coordination of FVH’s rehabilitative services, and the hospital as a whole.

“They communicated amongst themselves about what each discipline was doing and what they were working on, and how they could help each other to help me,” Dekkenga said. “We’ve got a hidden gem, and if you don’t have to make use of it, you don’t realize it’s there. They have so many services that shouldn’t be overlooked by the people in our community.”

The coordinated effort, along with being able to stay close to home, helped Dekkenga immensely on his road to recovery.

“I can’t say enough good things about them,” Dekkenga said. “It’s amazing that in such a small community, you can have a group of such well qualified individuals, that not only are good at what they do but they care. When I walk in the therapy department up there, it’s almost like family.”

That admiration and respect went both ways, according to FVH Occupational Therapist Alison Vlieger.

“He was just an awesome person to work with, he was hard working and he was motivated,” Vlieger said. “He would work on anything we said and he did a lot at home.”

Vlieger explained a lot of what was done was expanding range of eye motion by looking at whiteboards and tossing tennis balls back and forth on Dekkenga’s left side.

Physical Therapist Troy Henrich added the leaps and bounds Dekkenga made in his recovery were due to how he threw himself into therapy. “Everybody has a different motivation level, but Stu was just the guy that you could see it as soon as he got here, he was going to achieve his goals,” Henrich explained.

To illustrate how far he has come in such a short amount of time, Dekkenga said he recently went on a downhill skiing trip. “That was a challenge for me. It wasn’t easy, but I had a great time,” Dekkenga said. “I believe that God has healed me. I can read, and see, so much better than I could a year and a half ago.”

After finishing his final therapy session l, Dekkenga had a simple message to Vlieger, Henrich and all the therapists who worked with him: “Keep on doing what you do because you make a difference in people’s lives. For the last year and a half, two to three times a week, you made a difference in mine.”