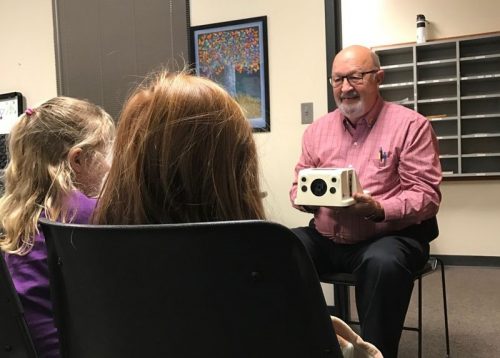 Iowa KidSight: Helping kids see, one screening at a time

Young children often can’t tell you if they don’t see well. Or maybe they think that their poor vision is the norm. But permanent vision loss can occur if not caught within the first few years of life. That’s why screening young children is so important.

Amblyopia (often called lazy eye), for example, can be corrected if caught early enough. The child wears a patch over the stronger eye, forcing the weaker eye to strengthen. Half of children, however, are diagnosed with this after the age of five – and by that point, the vision loss in the weak eye may be permanent.

Children six months old to those entering kindergarten are screened by Iowa KidSight, a partnership between University of Iowa Stead Family Children’s Hospital in Iowa City and Lions Club volunteers across the state. Out of all the children screened, about 5 percent are referred to an eye doctor. And of those children, about 90 percent need some type of corrective treatment. Issues caught by the screening can include far-sightedness, near-sightedness, differences in refractive errors, astigmatism, things inside the eye (such as cataracts), and muscle imbalances.

“The program has benefited thousands of kids by helping them see better, read better, and thrive,” says Lori Short, director of Iowa KidSight.

Short’s job becomes more meaningful when she hears about success stories from children they have screened. It’s common for some young children with vision problems to act out and struggle in school, but once the child’s vision is corrected, it often improves their behavior as well. “There was one boy I was told about who suddenly wanted to read and to learn in school, after realizing he could actually see!”

The Lions Club volunteers are all trained to conduct the screenings for kids in their local communities. There are 74 screening devices spread across the state, and each device costs $10,000. The local Lions Clubs raised the funds for each device. The device captures images of the child’s eyes to see how light refracts through the eyes.

The images are then sent to KidSight for processing and analysis. Wanda Pfeifer in the UI Department of Ophthalmology and Visual Sciences has analyzed every screen since the program’s inception in 2000. She either gives them a passing grade or recommends that the parents make an appointment with an eye doctor for a full vision exam. KidSight staff members provide a list of local eye doctors for each county in Iowa, and they follow up with every family who doesn’t make an appointment for an eye exam.

Since the Iowa KidSight program inception in 2000, nearly 444,000 children have been screened, and approximately 25,600 have been referred for an eye exam.

A new state law that went into effect within the last year now requires all children entering kindergarten to have an eye screening done, and Iowa KidSight is the only program in the area that provides that service free of cost.