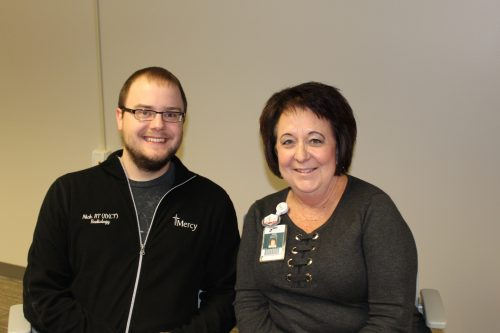 In Newton, Making Sure a Veteran Feels Appreciated

“Nick has always been known to be kind, generous and go above and beyond to help meet patients’ needs. What prompted me to write this was his thoughtful actions on Veterans Day weekend. We had a veteran hospitalized over the weekend who is a member of the color guard and very active during the year with his guard and fellow vets. Nick had quite a few interactions with this patient as he was in radiology a few times for x-rays that weekend. The patient was unable to eat for a while and could only eat ice chips occasionally, which led him to mention how he was missing his free Veterans Day meal.

“The patient and Nick chatted about his military service, his color guard experiences, how he was missing out on the activities he had planned for the weekend, etc. On Sunday after Veterans Day, Nick hand delivered an envelope to the patient’s room. The patient opened it and asked me to read it to him, as it was a long, handwritten note.

“The note was from Nick, thanking the patient for his military service, for his engaging conversations throughout the weekend and mentioning many details of their conversations they shared throughout their stay. It was very apparent that Nick had taken the time to get to know this patient and care about him as a person. The patient was so moved by Nick’s generosity and thoughtfulness and ended up in tears by the end of the letter.

Nick truly went above and beyond and out of his way to think about this patient and make his stay as pleasant as possible. Thank you Nick!”