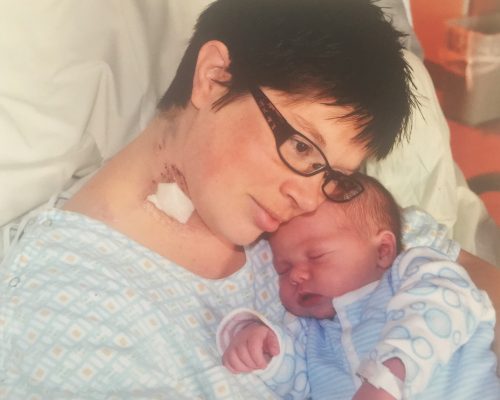 When Sara McCue gave birth to her third child at Grinnell Regional Medical Center (GRMC), she looked forward to having the care and support from the friendly faces of the nurses and doctors who assisted with her first two pregnancies.

“I delivered my first two children at GRMC,” McCue says. “Everyone—from the ultrasound techs to the obstetrics physician—made me feel so at ease through my first two pregnancies and deliveries. I received such high-quality care. I wouldn’t want to have a baby anywhere else.”

The Cesarean section delivery at GRMC went fine and Graeme was as healthy as could be, but McCue quickly experienced complications. She began to experience bleeding and this routine C-section quickly became a matter of life and death.

“My doctor told me throughout the pregnancy, that I had an extremely thin uterine wall, which could lead to complications” says McCue. “It was so thin Dan could see Graeme squirming around in there before the C-section.”

Her medical team worked to stop the bleeding. She had an emergency hysterectomy, which failed to control the bleeding.

“I remember talking to Dr. Coster after Sara had her third surgery to try and determine the source of the bleeding,” says Dan McCue, Sara’s husband. “There was a point when I asked him if I needed to prepare myself because Sara might not make it. It’s an experience I wouldn’t wish on my worst enemy. The joy of a new baby was quickly followed by the helplessness and despair of not knowing if my wife was going to pull through.”

While still in Grinnell, Sara received 12 units of blood and 15 units of clotting agents. Some of the blood she received had to be delivered to the medical center by a state trooper. GRMC staff was able to stabilize Sara during a third surgery and evacuated her via helicopter to Mercy Medical Center in Des Moines. After her transfer to Des Moines, Sara had one more surgery to confirm that the bleeding had stopped and to close her up from the previous surgery in Grinnell.

The family was grateful. She was going to be OK.

What happened back in Grinnell with their newborn son also gave the family much to appreciate. While Sara recuperated in Des Moines, the couple received regular updates from GRMC’s obstetrics staff about little Graeme’s progress.

The small town feeling of GRMC made a difference not only to Sara, but for Graeme as well. While Sara and Dan were in Des Moines, friends, family and GRMC obstetrics staff came together to care for Graeme, making sure it was one less thing for the McCue’s to worry about.

“The staff at GRMC went above and beyond for me,” Sara says. “They sent a CD with pictures of Graeme’s first few days, and sent a list of all his visitors. We didn’t get our ‘special’ steak dinner GRMC gives to couples who’ve just had a baby, so the Grinnell team sent a gift certificate for that. My grandma said she got to hold him for 45 minutes and the staff was so nice to her during that time.”

“We strive to provide excellent care, even when serious complications arise,” says Sheryl Baarda, RN, obstetrics nurse manager. “We had several staff members offer to come rock Graeme since mom and dad weren’t able to be there.”

After a whirlwind few days, Sara had recovered enough to transfer from the intensive care unit to the mother/baby recovery unit. The one thing Sara knew she didn’t have to worry about was Graeme being taken care of before he could join her. She had experienced the greatest fight of her life, but still hadn’t held Graeme.

“The staff took good care of my baby when I couldn’t,” McCue says. “They kept a list of everyone who visited, they took pictures and saved them for me, and they sent pictures to Des Moines for me. They didn’t have to do that. I know Graeme was cuddled and loved by the finest nurses and staff around.”

“Not only did the staff at GRMC take care of Graeme for us, they pulled some strings for me to be able to keep Graeme with me in my room at Mercy,” McCue says. “I will be forever thankful they made that happen. Holding him for the first time was maybe one of the most emotional moments I have experienced.”