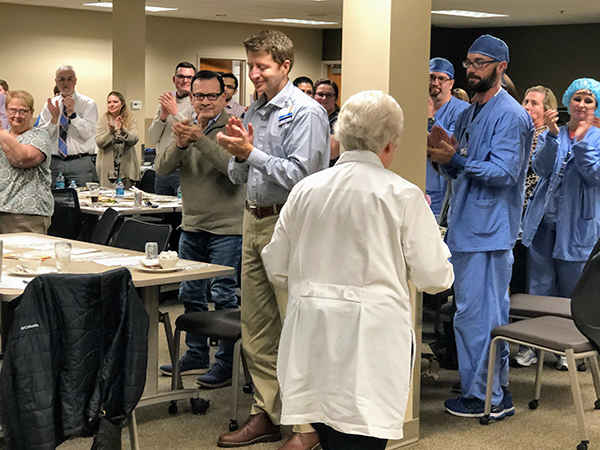 ‘Lady Doctor’ Looks Back on 50 Years in Medicine

An early ‘MacGyver’ of medicine, she’s ready to be ‘Grandma Jo’ full time

In the mid-1980s, the television show “MacGyver” introduced an intelligent title character who devised creative solutions to get the job done. Before that, there was JoEllen Hoth, MD.

In 1965, the 5-foot, 2-inch new physician was faced with a dilemma early in her internship at Broadlawns Polk County Hospital in Des Moines.

“I was working in the emergency department,” she said. “A large, drunk guy came in bleeding from a head wound. Six police officers were having trouble controlling him, and I thought, ‘What am I going to do?’ I put a suture through his earlobe and sewed him to the table.”

Although this creative solution couldn’t be repeated today, it began an early career of “MacGyver moments” that led to Dr. Hoth becoming one of the area’s most respected and loved physicians.

At 78, she will retire December 31, on the eve of 50 years of heading a one-woman practice in downtown Burlington.

A high school valedictorian from Cedar Rapids, Dr. Hoth was a sophomore at Grinnell College in Grinnell, Iowa, when she told her parents she wanted to be a physician.

“I checked the medical school requirements, and applied and was accepted. It was no big deal. I just went,” she told The Hawk Eye newspaper 50 years ago.

Hoth attended Grinnell College for three years. At that time, students could begin medical school at the University of Iowa after their junior year of college. Most undergraduate schools then granted bachelor’s degrees after students completed their first year of medical school.

Grinnell College wouldn’t oblige until Dr. Hoth petitioned the school to grant her degree when she completed all four years of medical school. In spring 1965, she simultaneously received a Bachelor of Science degree in chemistry and zoology, and her Doctor of Medicine degree.

Dr. Hoth was among 10 women in her 120-member medical school class, and she was the only woman among 14 senior medical students elected to Alpha Omega Alpha Honor Society.

When featured in publications, she was labeled a “feminine classmate” and “lady doctor.”

“The medical education was equal, but the infrastructure was not there yet,” Dr. Hoth said. “We rotated in the obstetrics unit for 24 hours in hopes of catching a woman in labor and helping with the delivery. There was a bunk room for physicians to rest and change clothes, but the head of obstetrics wouldn’t let women in there.”

Dr. Hoth began her career as a general practitioner because family practice hadn’t been introduced as a medical specialty. In 1979, she took an examination to become certified by the American Board of Family Medicine.

Known for her combination of pluck and pragmatism, Dr. Hoth understood most patients in her private practice would be women in the the beginning. “Men come as part of families,” she said. “You know a bachelor isn’t going to electively choose me if he can go to another physician.”

Only once did she have to set a male patient straight: “I had to tell him my name is Dr. Hoth, not honey.”

The former JoEllen Maly sang in the Grinnell College choir with her future husband, Steve Hoth, who passed away last year. But dating came years later. She left Grinnell for Iowa City, and he taught school in Africa for a year after earning his bachelor’s degree. She returned from her internship in Des Moines to Iowa City for their first date – his senior law school party.

“We had a lot of MacGyver moments there. We were totally unprepared. But you learn and you grow up,” Dr. Hoth said. “If you needed an X-ray, you took it, developed it and read it. When a patient had a dislocated hip, I used spinal anesthesia to relocate it. Family docs usually don’t use spinal anesthesia, but we didn’t have an anesthesiologist.”

When the year ended, Dr. Hoth, then 29, had more experience than most physicians her age.

Also an Iowa native, Mr. Hoth accepted a job at a Burlington law firm. Before the couple moved, Dr. Hoth called Harry McMurray, MD, who was president of the Des Moines County Medical Society. He invited her to a society outing on the other side of the Mississippi River in Illinois.

“I met my medical colleagues trapshooting at Crystal Lake Club,” said Dr. Hoth, who had never tried the sport. Her team won, and she made her mark. She is thought to be the second woman accepted into the society. Ursula Hahn, MD, was the first.

Dr. Hoth was accepted to the medical staff of each hospital, and in November covered another physician’s practice while he was out of town.

“I started from scratch with a yellow sheet of paper and a salesman to equip the office,” she said.

She had seven patients the first day. One was a woman who came for a pelvic examination. When the woman was positioned on the exam table, Dr. Hoth turned the switch on her new gooseneck lamp, but there was no light. She had forgotten to buy a lightbulb. Dr. Hoth sent her nurse to John H. Witte & Sons Drug Store on the first floor of the building and the problem was resolved in minutes.

Dr. Hoth has had only six employees in 50 years. The remaining employee, Katie Johnson, joined her the year the Third Street clinic opened.

Being a working mother

“I keep postponing a family because I haven’t figured out how to work it in,” Dr. Hoth told The Hawk Eye in the early 70s.

She had the first of her two sons when she was 34 years old. Andrew is a lawyer in Burlington. Peter, three years younger, is a family physician on staff at the University of Iowa.

Like most working mothers, there were times when Dr. Hoth had to be in two places at once. Her solution was bringing one or both of her sons to work with her.

“I got a call to deliver a patient’s baby,” she said. “My husband was the county attorney at the time, and he was busy. I brought my 1-year-old son to the hospital with me. This was before fathers were invited to be in the delivery room. I handed my baby to the father and told him, “You hold mine, I’ll get yours and we’ll trade.”

For Dr. Hoth, doing patient rounds in the hospital was like going to the grocery store. She put her eldest son in a shopping cart, gave him a bag of Cheerios and went from room to room. (The Obstetrics Unit still uses the cart to carry flowers and gifts when mothers and infants are discharged). It worked for her – until hospital administration asked her to stop.

“I think he did as much for the patients as I did,” she said of her son.

Dr. Hoth worked flex time before it was commonplace: “My ultimate responsibilities at work and home were significant, but I had flexible time. I could start making rounds, stop and go to Suzuki lessons (violin and cello) and come back.”

With six grandchildren now, she’s ready to exchange flex time for being “Grandma Jo” full time. She also wants to play golf and learn to play the guitar.

A life of achievement

Great River Medical Center Chief of Staff Mark Cleveland, MD, PhD, said Dr. Hoth “has set the bar way high [for our medical staff]. She continued to sharpen her skills throughout her career.”

For example, Dr. Hoth became medical director of Great River Hospice when she was 70.

“We needed to find a new medical director when the former director retired,” said Tony Hayes, executive vice president, Great River Health System. “This is not an easy job because it requires a lot of time and involvement from the physician. I asked Dr. Hoth if she would be willing to take on this role. She agreed to help me out temporarily.

“Dr. Hoth dove in completely. She attended national conferences and learned everything she could about hospice care. It didn’t take long for Dr. Hoth to inform me that she really enjoyed working with the staff and patients, and that I could stop looking for a medical director.”

“Dr. Hoth is best known for her sincere interest in her patients,” her nomination read. “She treats everyone with dignity and respect, and makes sure they feel valued. When conducting medical assessments, Dr. Hoth learns about patient’s families, their education, values and experiences. She spends evenings and weekends caring for patients.”

Besides practicing medicine, Dr. Hoth served on the health system’s board of directors for 20 years. She also held a term as medical staff chief.

Dr. Hoth’s family and Katie Johnson created a book with memories from her career. It’s in her waiting room, and the blank pages in the back are being filled with messages from patients. She will read them at the end of her last day in the office.

The average retirement age for primary care physicians is about 65. But beginning with her decision nearly six decades ago to become a physician, Dr. Hoth has proven she’s above average. She will be 79 in February.

“I think if you are committed to this job, you wear a yoke of responsibility 24/7,” she said. “It doesn’t keep you from doing things, but it’s always there. This is the right time to remove it.”

Medical advances since Dr. Hoth became a physician include heart transplants, cardiac stents, MRI and CT scanning, insulin pumps for diabetes and hundreds of new drugs. They have improved health and saved lives. And so has Dr. Hoth.

Despite continuing changes in medicine, her focus has never changed.

“It was all about the patients,” she said. “When my patients remember me, I hope they can say I listened and I was kind.” 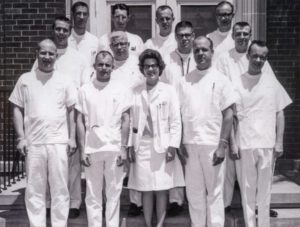 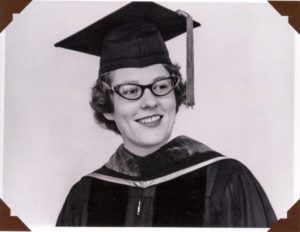 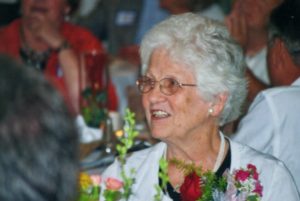