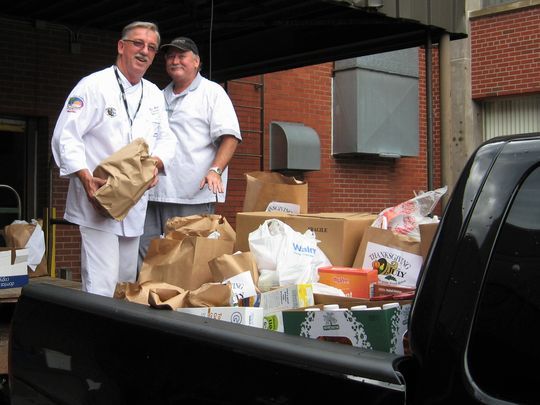 Feeding the hungry is a passion for Ron Hall, the executive chef for Mercy Hospital in Iowa City. For more than 50 years, Hall has fed a lot of people who can afford fine food, and many more who cannot. Although Hall has received state and regional recognition, including many titles as “Chef of the Year,” he is best known for his service to those in need.

According to the Iowa City Press-Citizen, Hall is not only a great chef, but he is a true leader in his community. Hall is a founding member of Table to Table, plus he donates his cooking skills toward many more charitable events. At a recent local March of Dimes auction fundraiser, his two in-home dinner packages sold for a whopping total of $8,500.

One of his greatest accomplishments is expanding the Thanksgiving in July program, which, since 1999, has collected tons of food for food pantries from Rock Island to Des Moines. The program mobilizes civic clubs, schools, businesses and others into a concentrated drive to collect nonperishable food items for families – all in the month of July. In 2017, the program collected 146 tons of food for 47 food pantries in seven communities in the state.

Hall told Dick Hakes with the Press-Citizen that his personal experience with an empty stomach is what fuels his passion for helping those in need. Hall grew up in a poor family where food was scarce. “I remember Dad would come home with three-day old rolls so hard you couldn’t eat them, so we’d turn them into bread pudding,” he says.

At age 16, he was fortunate to get a job cooking breakfast at a hotel in Coralville to support his family. After going to culinary school in California, he returned to serve as a chef for several local restaurants, then joined Mercy 25 years ago.

Mercy supported his successful executive chef certification by the American Culinary Federation. This national organization’s programs on child nutrition and hunger awareness further pushed Ron toward founding Thanksgiving in July and otherwise working to feed people who need it, as told by the Press-Citizen.

What he has learned over the years is that depending on who is on the receiving end, “canned beans can be as important as a $35 steak,” Hall said. Hall is thankful that he was able to break his own family’s cycle of hunger and hopes to expand the July food drive into a statewide effort and continue serving the patients of Mercy and those in the community.