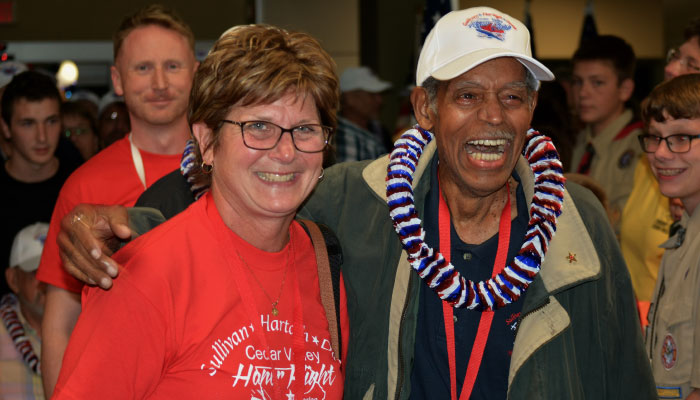 Edward Johnson, an 88-year-old Navy veteran, volunteers three times a week at UnityPoint Health – Allen Hospital in Waterloo. Over the years, Johnson has befriended Hospital President and CEO Pam Delagardelle. In the past, Johnson previously declined invitations to attend Honor Flights to Washington, DC for military veterans, as he has never wanted to take the opportunity away from a fellow veteran. However, his new friend helped convince him otherwise.

Edward reiterates the story: “Pam and I were in the cafeteria one day, and we were discussing an upcoming Honor Flight. She told me how important she thought it would be for me to go on the trip. I listened and after a while, I told her I’d go, if she went along with me.”

After considerable planning, Johnson and Delagardelle flew out of Waterloo Regional Airport on September 25, arriving in Washington D.C. later that day. The two paid a visit to Arlington National Cemetery, where statues stand to honor those who have served the country.

Delagardelle emphasizes the impact the trip made for her and her friend, “Watching Edward connect and share stories with other veterans was very emotional and uplifting. Seeing that makes you really understand the sacrifices made by every man and woman who served.”

Although the flight was meaningful for Johnson, it was also meaningful for Delagardelle. Delagardelle’s father, a former veteran, recently passed away in 2017, but not before he was also able to attend an Honor Flight. She notes, “My dad was critically ill before his Honor Flight but made a rally to go on the trip, and I feel like it completed him. Sharing that experience and enjoying the camaraderie with fellow veterans was exactly what he was meant to do at that time.”

Johnson is immensely grateful for such an experience, an opportunity he may not have otherwise attained without the important companionships Allen Hospital has provided him with. He further emphasizes the important and uplifting role volunteering has played in his life: “Next month, I will have 18 years of volunteer service at the hospital, and I think it’s just a part of me. I don’t force myself to do this job. I wake up and want to do the job. I’m no doctor, no nurse, I don’t go around drawing blood or anything like that. But I can push people around in a wheelchair. Here at the hospital, we have a camaraderie. We all work together for the good, and that’s what I like.”